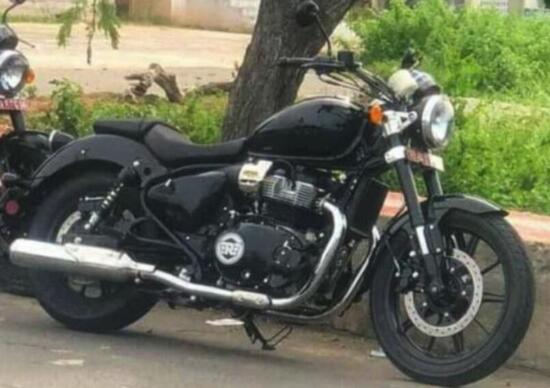 ROYAL ENFIELD recently registered the trademark “Royal Enfield Shotgun”, it looks like a new bike could be on the way!

>Have you ever wondered what MotoGP technology applies to road bikes, well, click here and you’ll see

Or the oldest motorcycle brand in continuous production plans to go back to its roots and release a real shotgun – unlikely.

This was reported by BikeWale, among others, who found the application of the ‘Royal Enfield Shotgun’ word mark to be suitable for use in: ‘motorcycles, motor scooters, scooters, electric motorcycles’ as well as many other possible uses.

What will become of the Royal Enfield Shotgun?

Could this Shotgun name be planned for use with the recently spotted cruiser, which has yet to be officially announced? More so, would a new cruiser be part of a revamped approach to the 650 twins, similar to the Continental GT and the Interceptor 650, with two models sharing the same engine but with slightly different approaches?

>Have you ever wondered what MotoGP technology applies to road bikes, well, click here and you’ll see

Aside from the ‘Out of This World’ Meteor 350, the gun theme continues from their UK ‘Bullet 500’ model, so a 650cc cruiser named the Royal Enfield Shotgun 650 makes perfect sense.

It has also been reported that the now Indian-owned brand has also registered various other names in recent months including Roadster, Hunter, Sherpa, Flying Flea – while some can simply be bookmarked for potential use, d ‘others can be set to come out fairly quickly.

I really feel like I say this every time a Royal Enfield story pops up, but if the Sherpa ends up being a Himalayan with a 650cc twin engine, I’ll be a very happy man.

We will keep you posted on this developing story, until then keep your rooms loaded. Keep it Visordown.

Buell Hammerhead marks the revival of the American motorcycle brand